What’s Next For Supergirl After “Crucible”?

Have you heard the news? DC Comics has announced a massive shake-up in their books starting in June, following the two-month “Convergence” event. 25 books are continuing, 24 new books are starting, with more debuting later (here’s the full list). The bad news is many books are being cancelled after March to make room. The good news is some amazing new things are coming as DC is finally changing course on the everything-is-terrible sensibility of the New 52. They’ve asked creators to employ “blue skies thinking” in pitching new ideas as they brighten up and diversify their books in a meaningful way.

‘Story Will Trump Continuity’ – The Batgirling Of DC Comics

However, one casualty of this soft relaunch is the current ongoing Supergirl title.

The series isn’t listed in the books returning in June, which comes as an awful shock after the success of the current new direction for Supergirl. The series is ending, if only temporarily, until the book is relaunched with a new team and a new #1 which will likely debut in sync with the Supergirl TV series this fall.

Does this mean the loss of the current dream team of Mike Johnson, Kate Perkins and Emanuela Lupachino on Supergirl? Yes, sadly. The series will end after the conclusion of the 5-issue Crucible arc in March. I know, we all thought this was just the beginning of a long and wonderful run. That hurts.

Lupachino will be drawing on the new Starfire book being written by Amanda Conner and Jimmy Palmiotti. Conner has redesigned Starfire’s costume and she looks AWESOME. Mike Johnson and Kate Perkins will be collaborating on a new project.

Big day of comics news! Can't wait to read the new @DCComics titles. And don't worry, Supergirl will be back. She's a got a TV series to

…prepare for. Huge thanks to everyone's kind words for our Crucible arc. Two climactic chapters left to go! In the meantime me &

…@perkylovesyou are working on a new thing that we can't wait for you to see. Thank you for all your support! #TeamKara

While I’m heartbroken to see this team go just after they started, we are so lucky to have had them come on board at this time and create so much good will for Supergirl. As great as the previous writers and artists have been on this title (interference from Scott Lobdell excluded), I never was able to connect with the character. I never disliked Supergirl in the New 52, but she never felt like Supergirl to me. I mourned for the Kara of the pre-Flashpoint universe. As much as I wanted to like this new Kara, she was a stranger who lacked any continuity with her pre-Flashpoint self. All that changed when Johnson, Perkins and Lupachino took over. I felt like I was reading my Kara again. For the first time, this series felt like a successor to the previous Supergirl. It was…wonderful.

I’m thrilled that this is the story we got to end the current series. This storyline sets up the character to be in a perfect position for the next chapter in her story. As much as I hate that we didn’t get a longer run, it would have been a missed opportunity if DC didn’t relaunch the book with a fresh start (as fresh as these characters can have in an ongoing continuity) in order to cross-promote with the TV series. That isn’t a reflection on the book. There’s nothing that needs fixing, not anymore. Supergirl isn’t coming from a super dark, depressing place that needs a long explanation. Tony Bedard brought her through the darkness and she came out shining, and then Mike Johnson and Kate Perkins took over the reins and together with Emanuela Lupachino they built something wonderful on that new, strong foundation.

When the book relaunches with a new #1 in fall 2015 (no doubt with a digital-first tie-in to the TV show), viewers of the TV series will be able to jump into a new storyline immediately and then go back to read the previous series in collections to see where this Supergirl came from. Lucky them! This is an interesting, solid three-and-half year run that collects nicely into six volumes and can be handed with confidence to someone wishing to read more Supergirl. 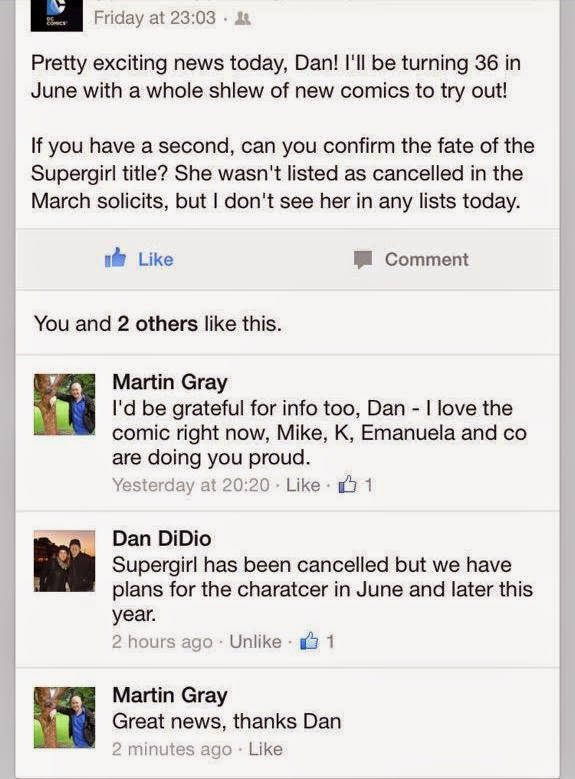